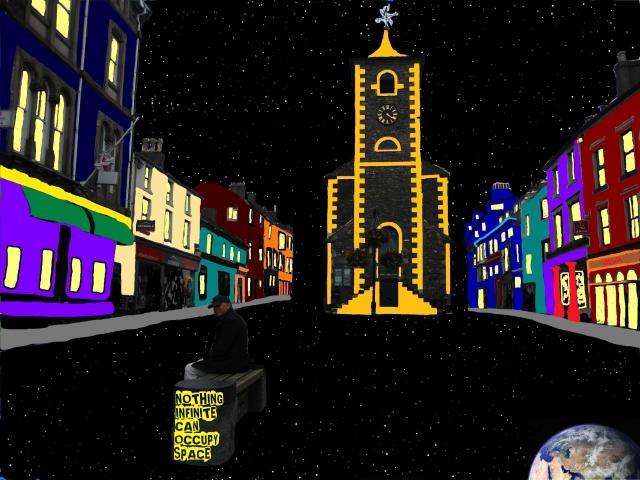 In England’s Lake District there is a town called Keswick. It’s a wonderful, beautiful town located on the edge of Derwent Water, an exquisite lake. Wife and I love staying in one of the B & B’s/hotels in what is called The Heads. Last time we were there, our room had a turret! We could climb up the stairs and sit on the window seat and read and look out over the lake and gorgeous scenery. Image above is the main street of Keswick, town hall in the back and some fantasy thrown in just for fun. 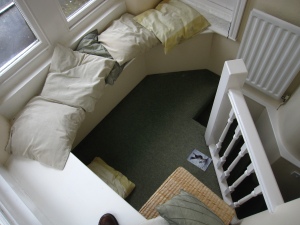 This is the turret room. I was standing on the window seat. My first lottery winnings will go to adding a turret to our house along with a view of some lake equal to Derwent Water. Talk about tranquility! It’s easy to forget what that is. What you see below is the view from the turret room. Wife dragged me around the lake on a hike one day. Fortunately. Keswick is one of those places that is so beautiful that it can lull you into believing that the whole world is like that. 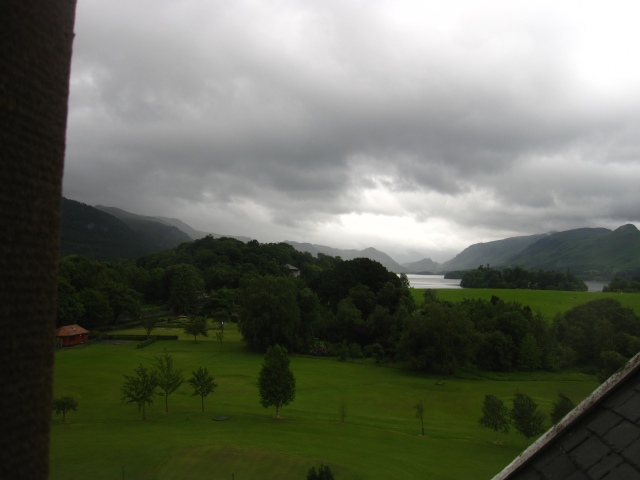 Seemed to whisper "yes" in every direction.

What we have now is a segue, a leap to the magic and a re-connection with a couple of Aussies. The stuff above about Keswick was just my way of not spewing about Charlie Sheen. Thought I’d start with something beautiful instead of sick.

I’m still breathing slowly and steadily so it must be working.

Just for your information, in the Aussie version of Cockney rhyming slang, a “septic tank” is a Yank, which, of course is short for Yankee, which is someone who is often told to go home. As in “Yankee Go Home!” As in an American.

Then there are the New York Yankees, the scurrilous baseball team.

Even on Wikipedia nobody knows for certain where the word came from. It apparently showed up around 1759 or so.

Actually, “septic tank” might also be the Cockney slang for Yank.

It was Drew Brien, an Aussie of true aristocratic bearing, who told me that “septic tank” was a slang term for a Yank. He informed me of this somewhere in Turkey, in the summer of ’83.

We were probably walking down some dusty pathway leading to Greek ruins. Or we might have been following the depressions of old Turkish trench lines on top of the steep hills overlooking the beaches at Gallipoli where thousands of Australian and New Zealand soldiers were killed by the Turks in WWI.

That slaughter was Churchill’s fault, I think. I believe he came up with the idea of attacking the “soft underbelly of the Balkans” and figured the Anzac forces could do it.

Anyway, visiting those graves at Gallipoli was a moving experience. To see row after row . . . well, I won’t dwell on that. The fact is that I never would have visited the Gallipoli site if I hadn’t been traveling with Charmaine and Drew. The truth is that from the time I left Belgrade until I reached Athens several weeks later, their compansionship proved to be one of the highlights of all my travels.

This morning I wrote them another email. I think they were slightly skeptical about who I was after receiving my first email. You know how the CIA et al work these days. I don’t blame them.

To understand the full story here, you can read the “Magic, perhaps” and “Charlie Sheen” posts.