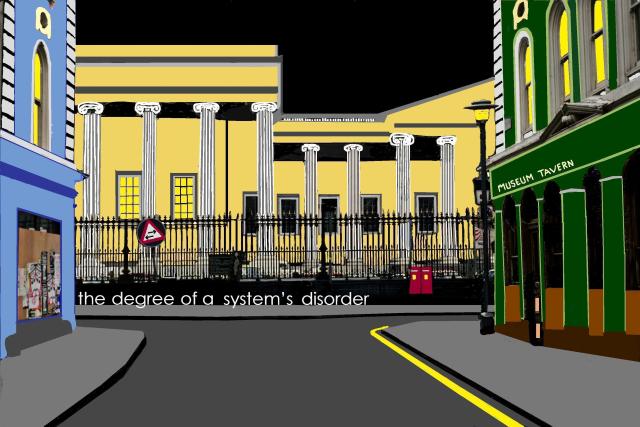 A painting done at one of my favorite spots, a magical place for me.

Still no rabbit. No magical moment. I have as yet received no response to my email. Many possible explanations, as any email user knows. I will keep my cursor poised above the hat. Something is bound to happen. Who knows what might come out of this hat. Charmaine Caskey is the woman’s name, Aussie to the core.  I would love to get in touch with her and tell her how much I miss having tea from a samovar while she and her husband, Drew, explained the world to me.

The above painting is my homage to Andrew Murray, a British “primitive” artist whom I discovered for myself in the ‘80’s. He did this very same view in one of his paintings which became a poster that was sold all over London at one time. I bought one and it hung in my work space until I departed. It provided a nice visual retreat from the abyss I had to look into all day.

(By the way, if you turned around and looked in the opposite direction of the British Museum, you would see The Plough on the next corner. The Plough is where my wife and I spent part of our first date. It’s where my most sacred poem, “The Tongue and the Blonde,” takes place.)

Above, in fact, is Murray’s interpretation of the nearly same view. This intersection is near the center of my London “village.” Russell Square is roughly the center of that “village.” It’s interesting that Murray put the entrance to the British Museum at the end of the street, which it clearly is not. I will not admit to you how many years it took before I realized that.

The text on my painting refers to “entropy,” which, as everything continues to accelerate, seems to me the dominant feature of this hurtling planet. Entropy basically means “a process of degradation,” or “a trend or movement to disorder.”

All you have to do is think of Charlie Sheen to see the current human embodiment of entropy. Drugs basically create a lot of entropy in human biological systems that ingest them. A huge amount of “disorder” starts happening in the ingester’s life.

Then, if they have no regard for other humans but are only capable of thinking about themselves, these creatures inflict their illnesses on others. In Sheen’s case, he has no qualms about going viral (here a truly apt term!) with his sickness. He’s a bag of pus that has ruptured.  And stupifyingly credulous and co-dependently indulgent media are delivering his pus to the world.

Sheen is the modern equivalent of a carnival geek. No, not the nerd type of geek, not the Bill Gates type. In the old days of carnivals, geeks were the bottom rung. They had no real talent so they resorted to the outrageous to entertain. They would bite the heads off of chickens, for example, and suck out the blood.

Sheen would bite the heads off his own children if he thought it would get him a sound bite. You can’t get away from him. I don’t even own a television. I’ve never watched his show, yet a congregation of his foul vapors follows me everywhere.

He degrades our lives. There should be fines for that!

And here’s something else degrading and a symptom of our sick time. More entropy: Ohio is following Wisconsin in targeting the rights of its American citizens to collective negotiate their working conditions. Two retro-states, having performed U-turns in the middle of the road of progress are now racing backwards, to the ‘50’s? ‘40’s? Perhaps they can take back the voting rights of African Americans while on their way to the Middle Ages.

I think Charlie Sheen would make a fine spokesman for both those states, their regard for human dignity being so similar and all.

I apologize. This was going to be a post about some fun travels in Turkey with Charmaine and Drew that, eventually, got me a small poem or two, or three. Next post, I hope.