This is the Blue Mosque in Istanbul. The name comes from the iznik tilework decorating the inside. It was finished about 1616. It has six minarets, which was controversial at the time. Mecca also has six.

I once took the train from Belgrade, Yugoslavia, to Istanbul, Turkey. The trip took nearly two full days and gave me a profound education about human life. I boarded the train in Belgrade as a simple minded American, and when I stepped off the train in Istanbul, I took my first step as a global citizen.

I was almost arrested crossing Bulgaria. I made a big mistake, and the consequences were terrifying. I got a close look at the skull beneath the face of tyranny, and it changed forever how I understand the world. It wasn’t funny at all, even though I ended up writing a poem about the incident, which I titled, “Globalization of Humor.”

lOOKING ACROSS THE OLD GALATA BRIDGE, NUMBER 4, WHICH BURNED IN THE EARLY '90'S. THE BRIDGE BETWEEN EAST AND WEST.

Because of my travels, especially to several countries that were behind the Iron Curtain at the time, I get a little touchy when the rights of people are threatened or (Wisconsin!) taken away.

Totalitarian isn’t always synonymous with “foreign.”  One wonders how long it will be before crossing a place like Wisconsin will be like Bulgaria in the old days.

How long will it be, folks, before this whole country is in a cold war with itself?

But back to Turkey. That’s where this magic thing started anyway. 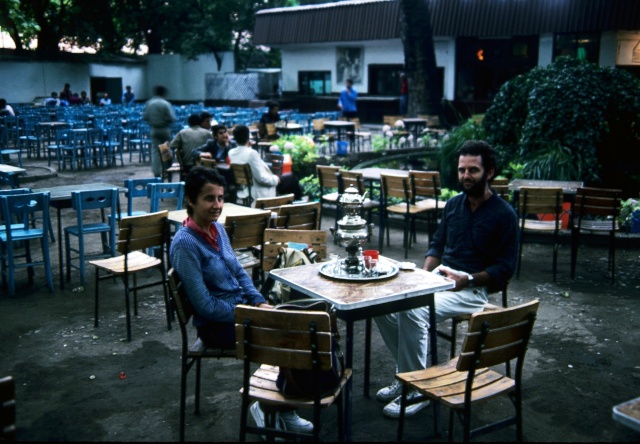 CHARMAINE ON THE LEFT, DREW ON THE RIGHT. AT THE GARDEN CAFE IN THE TOPKAPI MUSEUM? WHO KNOWS?

I don’t know if magic is the apt term here. Something nice and unexpected in my life, maybe that’s better.

I wanted to see Troy, the ruins of Troy. That was one of the reasons I went to Turkey. But by the time the train was rounding the Golden Horn and the Beauty of the Bosphorus swept into view, I realized that there was more to see than I would ever have time for.

Politically, it was just about the worst time to visit Turkey. It had been under a military dictatorship for three years, and tourism had nearly disappeared. From the day I stepped off the train in Istanbul until a month later when I left Marmaris on a small boat bound for Rhodes, I didn’t see, let alone encounter, another American. Not even from Wisconsin.

THE UBIQUITOUS SAMOVAR: WE MUST HAVE DRUNK HUNDREDS OF CUPS OF TEA FROM SAMOVARS. "OOCH CHAI" MEANING THREE TEAS.

I traveled with a couple from Australia. Drew and Charmaine. We met on the train platform in Belgrade and discovered that we had tickets for the same train to Istanbul. Not only that, we also discovered that our itineraries nearly overlapped. We both planned to swing down the coast of Turkey. There, at least at first, our plans diverged.

Yeah, the Australian couple, Drew and Charmaine, are part of  my minor unfolding wonderful thing here, courtesy of the internet, which may or may not come true, but it’s getting close. As it turned out, I traveled with them for a month or so through Turkey and Egypt. A wonderful time! We argued about everything, shared meals, buses, a billion cups of samovar-served tea and just had a great time in general. They were expert budget travelers and taught me a lot. 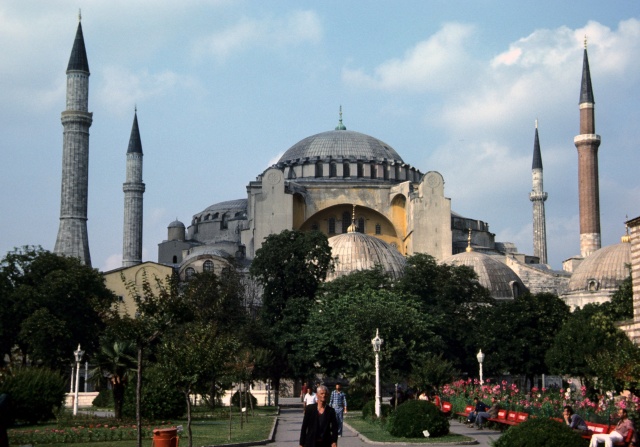 HAGIA SOPHIA, BUILT ABOUT AD 537. CONVERTED TO A MOSQUE IN THE 15TH CENTURY

We eventually split up in Luxor, Egypt. They were going deeper into the desert, and I would wander my way north to get stuck for a week in Alexandria before departing for Greece etc.

THE AUSSIES ENJOYING TAMARIND OR MANGO JUICE IN lUXOR, OR WAS THIS CAIRO?

I never saw them again. In fact, I’ve never communicated with them at all since Luxor (did I send/get a postcard?). I lost their address somewhere along the way, something I’ve never really forgiven myself for. And worse, by the time the Internet came along, I could not correctly remember their last names!!

But . . . yesterday, after I started to write this entry, I ploughed through old garage boxes looking for my journal of that year  (’83). I thought it would spur the memory. I couldn’t find the journal for ‘83! Frustrated, I picked up ’82 and started reading about trips through the Soviet Union, East Germany and other Wisconsin-like territories.

Eureka! First, folded and jammed into crush of other papers of various kinds – mostly ticket stubs, etc. – was a scrap of paper which I almost discarded without looking at it. Instead I unfolded it and discovered the Aussie’s names and addresses! How the hell did it get into the ’82 journal? The address, however, was (as they had told me) a temporary p.o. box. they were using while they traveled the world.

But I had their names. This morning, after a considerable search, I believe that I have come up with Charmaine’s email address. I hope. It’s her work email. I have emailed her, but due to time differences I don’t expect any response for several hours. If it’s not the right Charmaine?