Reality is not what it is. It consists of the many realities which it can be made into. Wallace Stevens

This story and some of its reality starts in Athens. First time I saw Athens was 1980, and what a bumpkin I was! Gosh and golleee everywhere, jaw flapping on my sternum. Getting by on less than $5 a day!

Stayed at a place called the Orion, way out near Strefi Park. It’s now a one star place. In 1980 it was a category D pension. Wonderful place: the first time you have breakfast on a rooftop with a grand view of the Acropolis in the distance, well, it’s something you don’t forget.

That was pre-internet, of course. I carried one budget travel book, Frommer’s naturally. Now it’s hard to count the number of times I’ve been to Athens and the world is all made up of pixels.

But by the year 2006 I realized that I hadn’t been back to Greece in a long time. That plus the fact that my wife had never been there finally kicked us in or tourist slats. I spent most of the spring of 2006 cruising the streets and byways of Athens online before we got there. The islands too, of course. I discovered a great site run by a guy called Matt Barrett, and I lived a little bit in his version of Greece every day. I would recommend it if you ever plan to go to Greece.

You see what’s happening here, don’t you? I’m getting stuck on the Greeceness of my Greece. The Greece that I know, that’s mine because the memories of it are strewn about my mind like ruins. I can wander through them and reinvent my journeys there, indulge in the reveries of Greece.

So, I’ll have to strap myself to mast of this computer and get down to it, to my visit in 2006. Where it all started.

They had huge demonstrations and riots in Greece that summer. They didn’t get as bad as the ones during Christmas time 2009, but they certainly sharpened the edge on everything. In a distant life I was once a photo journalist slash other things. Made somewhat of a living taking pictures. But that was back in the day when I carried self-loaded rolls of Tri-X, ASA 400 film. Bought it in bulk quantities, 100 feet at a time. I was still clinging to the antiquated film mode through 2005! Finally, in 2006, I bought my FIRST digital camera. A Nikon Coolpix 7900, for the record. It was an antique about two months after I bought it. Great little camera. I took it to Greece, shot thousands of images and didn’t have to carry a single roll of film. 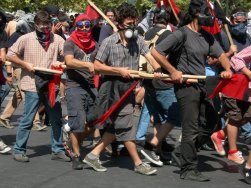 So . . . naturally when the demonstrations started up, my instinct was to rush out to the streets and start clicking away. My wife, however, had a slightly different instinct, one significantly more prudent. Bless her, though.  Within seconds she was trotting beside me uttering choice expletives and comments about one of us re-living the ‘60’s while I got caught up in the nostalgic street drama right outside our hotel, which was at this time of our trip the Hotel Grande Bretagne, right on the corner of Syntagma Square across the street from the Parliament. (A disclaimer: No, we can’t afford to stay at either the Electra Palace or the Hotel Grande Bretagne! Those are five star digs. We have a sort of two star income, but we save a lot so most of the time we can fudge up to three star travel. But I had gotten lucky. A nice chunk of money came out of almost nowhere while we were planning the trip. I used the whole chunk on the trip. Not a single regret.)

Thoughtful message from our hotel

My wife and I joined the fringe of the hubbub as it swirled around our hotel. Before we reached the corner, we could hear the barrage. At first we thought it was gun fire. There was a moment of pause, let us say. I, for one, took full advantage of the pause. A peek around the corner, however, revealed that the “gun fire,” was actually the sound of bricks, half full water bottles and other weapon-like debris crashing into the clear plastic riot shields wielded by the police. Caught up in the roiling mass, we were swept along to the next corner. Suddenly, a young woman in front of us dropped to the ground. Before we could even respond, we knew why.

This stuff makes a helluva noise when it hits the shields carried by riot police!

I hadn’t had a whiff of tear gas since, yeah, the ’60’s. And a whiff was all I needed. Wife and I in total agreement: grabbed each other’s hand and scooted through the throng to the nearest sidewalk and slipped back around the corner where we could breathe. “I hope you’ve had enough of this,” she said. 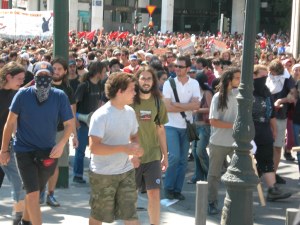 Just a tip of the melting iceberg: 10,000 more behind them

A simple nod sufficed. But it was strange. When we got back to our room (#155 – ground level with an uninspiring view of the courtyard), I hardly thought about the chaos going on outside. The keen spritzes of adrenaline propelling my thoughts were triggering forty year old images from another lifetime. Riot endorphins? I sat down on the bed and and flicked through my images until I came to the mannequins. We could still hear shouts and loud pops that still sounded like gun shots, but my mind had taken a ride on a segue.

No riots: obligatory shot of Acropolis, from roof of The Electra Palace

Ok, I’m taking a break here. Uploading and placing the photos is driving  me nuts. I had hoped for something more artistic, the text wrapping aesthetically around each photo with some commentary about its relevance to the pretentious arcing narrative going on here. I’m going to have to work on this some more.

The segue? From Athens we make a logical leap back  to Fresno, CA. A long time ago.